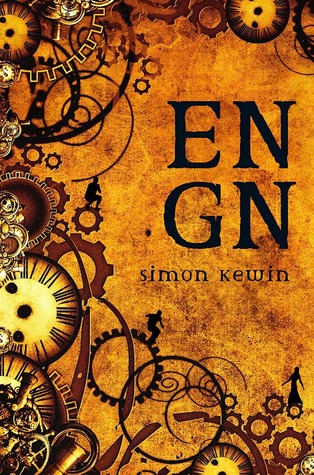 How I acquired it: I received an ebook copy of this book from Curiosity Quills Press on NetGalley in exchange for an honest review. This, in no way, affected my opinion.

Finn’s childhood in the valley is idyllic, but across the plains lies a threat. Engn is an ever-growing steam-powered fortress, that needs a never-ending supply of workers. Generation after generation have been taken away, escorted into its depths by the mysterious and terrifying Ironclads, never to return.

The Masters of Engn first take Finn’s sister, then his best friend, Connor. He thinks he, at least, is safe – until the day the ironclads come to haul him away too.

Yet all is not lost, Finn has a plan. In the peace of the valley he and Connor made a pact. A promise to join the mythical Wreckers and end Engn’s tyranny.

But now on his own, lost and thwarted in the vastness of Engn, Finn begins to have doubts. Is Connor really working to destroy Engn?

Or has he become part of the machine?

Ok, let me start off by saying, it took me 5 days to read this book. I’m not even sure why I finished it. Simon Kewin could be a great writer but from this book I didn’t see it. The writing style was very predictable and not interesting. Present, past, present, past then a different POV. Then back to the present. It was a little all over the place and it just didn’t work for me. I think it could have been better with less information about the past.

The plot was there. The story line really had potential and I think it was talked through well but the characters didn’t line up with the story line. At the beginning Finn is portrayed as a scared little boy who always runs home to mommy when things go wrong. He’s even scared of his “best friend” Connor. There was never a specific point where he “outgrew” that faze and out of nowhere he is supposed become part of the Wreckers and destroy Engn? His character was the downfall of the book for me. And he’s the main character so it never got better. I think if the story would have followed Connor’s or Diane’s POV it would have had a better chance of working. Because Connor’s storyline made sense do to his family ties. And Diane had been running from Engn for a while so it would have made sense to talk about her side of the story.

I couldn’t tell if there was a romance aspect to this book. I think Kewin hinted at it but it never really connected.

The reading level was easy. However there was a lot of past information I felt I needed to remember only for it to not play any roll in the rest of the book.

The ending was very predictable. Going in I could see the ending going several different ways but as the book progressed it was easy to see which direction Kewin wanted to go. I think it had great potential for plot twists and a shocking ending but it didn’t get there. There was a part that was left open ending and it might be in the second book (if there is one) but if not, it could have easily been left out to not confuse the reader.

Things to do between books.

Hi everyone! I’m Anna. A 20 something Disney lover who aspires to travel the world, always with a book in my hand.